Turn your birthday into an adventure of a lifetime. 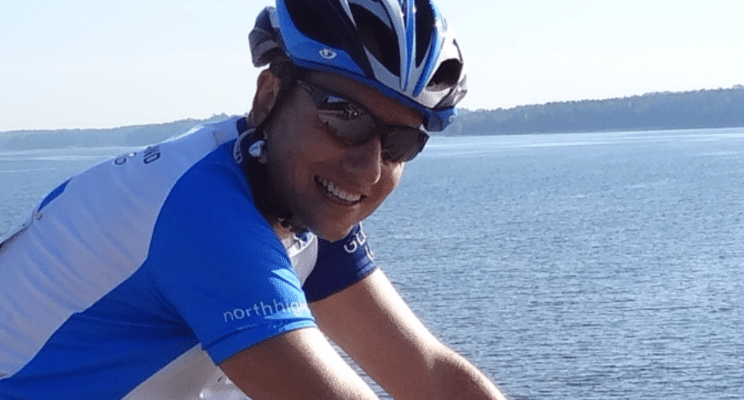 Rick Berg turned his birthday into an adventure of a lifetime by riding 6,000-mile ride from Portland to Maine.

When Rick Berg turns 55 on March 11, he’ll celebrate with his feet in the pedals of his bicycle as he starts a 6,000-mile ride from Portland, Oregon to Portland, Maine – via San Diego and Chicago. Check out his route on the map in the background of this photo.

A cancer survivor and empty nester, he initially planned to hike the Appalachian Trail. Berg recalls a friend telling him,

“‘You are not a destination guy – you are more do a journey-guy-and-describe-it-as-you-go. What journey would mean something to you?'”

The best journey, Berg thought, would be to ride his bike to see as many friends as possible. “I will see between 100 and 110 friends and family on the ride, which is going to be one reunion after another,” he told friends at a going away party at one of his two favorite bike shops, Bicycle South, in Decatur, Ga. (His other favorite is Hub Bicycles in Athens.)

Friends helped him train, plan, and pare down the weight of everything he’d take. Even his Kindle stays home. Laughing Skull Craft Beer offered to sponsor the trip and will throw parties at key stops along the way.

The point of Rick’s adventure

He summed up the point of the adventure in this recent post:

“a key thing I’ve learned in preparing to ride next weekend from Portland Oregon is that we can push ourselves, no matter how old we are…even if we are about to turn 55 years old…even if doubters throw potential obstacles at us…even if an ache or pain in a joint gives you a potential excuse to dial-it-back or not try it at all, but by putting it out there to friends and family who care, these minor bumps fade away due to the hugs of encouragement that you get from the people who love you and want you to try (and hopefully succeed). and, the TRY does matter.”

You can follow his six-month-long celebration on social media (Facebook, Instagram, etc.) at @RicktoPortland, which is also the name of his blog. You can also send him a note at RicktoPortland@gmail.com.

Join me for Community Mat starting Tuesday, January 3rd at the Coal Harbour Community Center in Vancouver on Wednesdays at Noon. Reserve your spot with the CHCC now. First class is free.